You grant your consent to all cookies by clicking on the “Accept all” button. If you want to accept only technically necessary cookies, click on the “Only necessary“ button.

Accept all Only necessary Settings
Menu

Something about the history of brewing in Dobřany

Due to its convenient location, the surroundings of the town were inhabited as early as the Stone Age. The development of Slavic settlement is documented by finding a burial ground used in the 10th and 11th centuries. northeast of the town on the way to Šlovice. The first written mention of the existence of the seat with the name Dobřany is kept in 1243 in the predicate Záviš of Dobřany, a member of the royal entourage.

The beginning of brewing in Dobřany dates back to 1378. At that time, the townspeople were granted the privilege of brewing by the provost Udalrich. This right was confirmed by the Czech king Vladislav ll. and Emperor Ferdinand III.

The original brewery was located in Pivovarská Street. In 1872, a new brewery was built on Kamínek by the townspeople. In June 1998, in honor of the 620th anniversary of the grant of the brewing right, T.G.M. No. 159 brewery opened - restaurant "BLUE STAR".

Beer is produced by the famous Czech technology using traditional raw materials, ie. malt, hops and water. The capacity of the whole facility is approximately 1,500 hl of beer per year. All exhibited beer is served as yeast unfiltered, ie slightly cloudy. Turbidity is formed by brewer's yeast, which is removed by filtration in ordinary beer. However, yeast contains a significant amount of vitamins and other substances that have a beneficial effect on the human body. 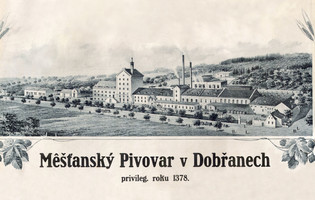